I am still “stuck” in Bali due to travel difficulties around COVID, but I expect to be back to LA in the next few weeks, travel permitting. Either way, my next plan is (hopefully) to take a well overdue vacation. Posting my analysis here on my website and on my Twitter feed used to be very enjoyable, but lately it has become mostly just aggravating.

From 2017-2019, I spent much of my time (and money) trying to put down two lawsuits filed in New York which claimed that my name Richard Pearson was nothing more than a pseudonym being used by some guy “Ricardo Antonio” whose whereabouts are supposedly unknown and who writes phony articles about stocks here on Moxreports.

As absurd as that may sound, these statements were then copied around and incorporated into many ongoing tweets, online articles and legal papers, which themselves would then get copied around even further. That all became quite complicated to unravel.

Finally, in November 2019, I managed to establish in a federal court the simple fact that Richard Pearson’s name is Richard Pearson and that I do indeed live in California, just like, you know, it has always said on my California drivers license. duh.

But even here, the suit ended up being thrown out on jurisdiction only, and the judge for some reason did not bother to comment on the “nomenclature” around the fact that stated my name was just a pseudonym used by some guy named “Ricardo”.  So even after getting the suit dismissed, I then had to make a special request to the judge asking her to provide an explicit statement after her ruling to remove any further possibility for confusion around my name or where I live. So after three years of effort I then got a simple one-sentence statement from judge Naomi Buchwald in SDNY which confirmed that during this litigation “Richard Pearson had established that he was a citizen of California”. That was it. It was a very underwhelming conclusion to a very lengthy and expensive process.

But then six months later, in June 2020, I saw something new come up in a report going around online written by a professor out of London. Since it includes another reference to me, I want to nip this one in the bud before it gets copied around too many times.

My bias in favor of long trades should be obvious to anyone over the past few years. But in this newly published report Richard Pearson is being portrayed as one of the most “prolific” activist short sellers since 1996. In addition, apparently I am a short seller who is perceived by public companies as being among the very least credible of all activist short sellers. These conclusions were based on a “sample” which had been collected across this very lengthy 22 year time period from 1996-2018, so it all sounds quite methodical. But first off, get this, the basis for the “least-credible” part rests on the fact that when I used to write short reports, very few companies would ever respond to me – only 13% according to this professor.

This low response rate to my reports was being presented in this report as “evidence” that I have been determined “ex ante” to be less credible in the minds of companies. I hope you all enjoy the irony of this. This report does use my actual name Richard Pearson (he did not call me “Ricardo”). But now, this portrayal of Richard Pearson can be viewed as “prima facie” preposterous. 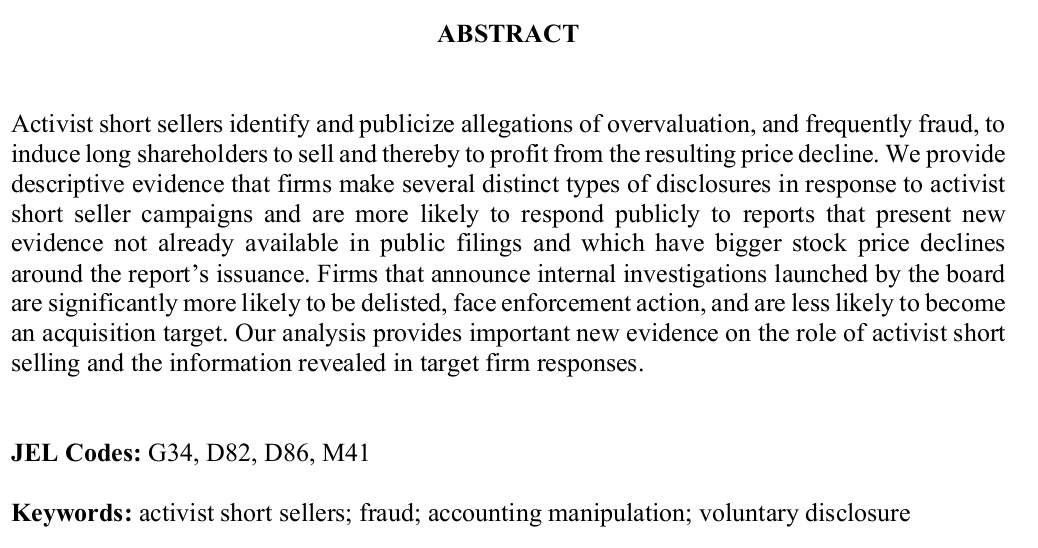 It can be easily seen by anyone that I haven’t written a single short report in more than two years. And in fact, during the majority of this professor’s 22 year sample period I had not yet even written my first-ever short report !!

So how did the professor come up with such conclusions out of 22 years of data ?

During those 22 years, data shows that there had been as many as 4,000 short reports published, yet in his sample, this professor used the data from a mere 351 of those reports. In other words, to come to those conclusions, he ignored as much as 90% of the available data.

The website Breakout Point provides an easy reference point for ball-parking this. In just the first half of 2020, Breakout Point had already identified and tracked 91 short reports issued by activist short sellers during just this six months. Short seller reports have become more common in recent years, but for anyone who bothers to look at the data, it is easy to immediately see that over the past two decades they have been a very common occurrence on platforms such as SeekingAlpha and elsewhere.

Therefore, in my ballpark view, any conclusion reached via sampling a mere 351 reports over 22 full years should be consumed with a considerable grain of salt. If at all. You should form your own opinion.

But to his credit – and this is very important – this professor did disclose those details behind his methodology, including explicitly stating that his sample size was 351 reports, for anyone who chose to read into the details.

In this table, you can see that “Richard Pearson” is then listed as number two, right underneath Sprucepoint. But given that the methodology for such rankings had ignored up to 90% of the available data during those 22 years, I certainly see no validity to any of these “league table” rankings of short sellers. I did reach out to the professor and told him that, in general, reports about data should focus on the data and not on the personalities involved. Otherwise it creates significant potential for such reports to be misused, and in a surprising variety of ways. I gave him a detailed explanation of the events around my past three years of lawsuits asserting that I was some guy named “Ricardo Antonio”. I also pointed out that for each of the other authors on his list he had shown the publishing “brand name” where they use one, but for me he had used my personal name Richard Pearson instead of Moxreports. I also highlighted a few other issues with how he was aggregating the reports shown on his league table.

The professor later changed this league table so as to make it a ranking without names and on July 17, 2020 he republished a new version of his report to the SSRN website.

But wait a minute. By asking him to leave my name off of the cover following a discussion with him where he then changed his report several times, this could then be mis-portrayed in a very different way – as if I had somehow been involved in writing his “Activist Short Seller” report but that now I was sneakily trying to conceal my involvement in it. Sigh.

Sadly, such absurdity seems to have become the rule rather than the exception over the past few years. I see many other examples of nearly identical nonsense across social media and even regular media as soon as I start tweeting about anything in either direction, or even when I Tweet that I am simply neutral on something. Anyone who follows my @Moxreports Twitter feed will know exactly what I am talking about.

As I have already illustrated, such small nonsense may appear absurdly trivial at first glance. And it often is, at first. But it has very real potential to snowball into much larger nonsense as it gets repeated and rebroadcast over time. This is just the world we live in. So I have learned the importance of addressing such things early on.

As most of you know, I could go into my usual lengthy routines to illustrate and prove these things if I felt like spending the time to do so. Wading through these challenges used to be lots of fun. But now I find such nonsense more aggravating than anything else. So for now, I am taking a long vacation for the rest of the year. Yeah, I can do that.

Sometime in 2021, I will figure out what I feel like doing with this site going forward. My past work will, of course, continue to remain online for your enjoyment.

If any of you see any unusual references to my name or my past work, I would appreciate if you would email me any details or screenshots to the email address shown on my contact form.