This article is the opinion of the author. Nothing herein comprises a recommendation to buy or sell any security.  The author is short OHRP. The author may choose to transact in securities of one or more companies mentioned within this article within the next 72 hours. The author has relied upon publicly available information gathered from sources, which are believed to be reliable and has included links to various sources of information within this article. However, while the author believes these sources to be reliable, the author provides no guarantee either expressly or implied.

– Today shares of Ohr Pharmaceutical (NASDAQ:OHRP) fell by more than 65% intraday following the announcement that its OHR-102 (Squalamine) eye drug failed to meet its primary goal.

For those who lost money on Ohr, I take the view that it was a loss that was entirely unnecessary.

There are a number of key reasons why any objective observer should have downright expected these results.

Back in July, I wrote an article entitled “The Ugly Truth Behind Ohr Pharma“. The conclusion I reached was as follows:

Squalamine was purchased for a negligible cost from a bankrupt pharma because it had already failed and was clearly worthless. Dozens of other buyers had the opportunity to bid on squalamine and no one was willing to pay a material price. Ohr acquired the cheapest compounds that it could and then appointed the cheapest management that it could. There was never any real chance of these compounds succeeding. Instead, Ohr has used misleading press releases and stealthy paid “research reports” to boost its stock price and raise money via stock sales. Ohr Pharma is little more than a fool’s game for retail investors which has been engineered by clever financiers.

That article along with the current result from Ohr demonstrate several key lessons that can be applied to many other small cap biotechs.

Lesson #1: Companies who pay for stock promotion should be avoided. Period.

I have written repeatedly about companies who pay to have their stocks promoted and I have always taken the view that these companies are great shorts.

Yet there is no shortage of investors who take the view that “I don’t care if the company paid for promotion, I believe in the prospects for the drug”.

There are two points that such investors are missing. First, if the drug had such strong prospects, management would not feel the need to jeopardize their company with risky promotions. And we shouldn’t forget that management are the ones with the best view on the real prospects for their drugs.

Second, many investors fail to realize that their bullish views on the drug’s prospects will have often been shaped by the paid promotions. The whole point of these promotions is to generate positive sentiment. As a result, investors should apply extra scrutiny to any information when there is evidence of paid promotion. Because what you think you may “know” about these companies may in fact ultimately stem from paid hype designed to boost the stock.

When I wrote about Cytrx (NASDAQ:CYTR) and Galena (GALE) last year, I expressed my concerns about their use of The Dream Team Group to run paid promotions on their stocks. The biggest criticism I received was that I failed to understand the massive potential for their drugs. Both stocks have fallen by 50-70% since that time as their stories have come unraveled.

Lesson #2: Sell side research is woefully deficient and predictably biased

The details in my article were easy to find for anyone who chose to do some simple digging. The only conclusion that any objective researcher could come to was that this stock was grossly overvalued even at prices of $6.00.

Yet the 4 investment banks who covered the stock all had buy ratings on it with targets ranging from $20 to $34.

Investors should make no mistake when looking at the relationship between small cap biotech stocks and the investment banks who finance them. These banks have a dual incentive to put out uber bullish stock targets and boost the share prices of their clients.

The first incentive is obvious. These banks want to increase liquidity and price to allow the company to raise money. Putting out lofty share price targets helps to curry favor with management so that when the time comes to appoint an investment bank they are more likely to be selected.

The second incentive is less obvious. But it should be kept in mind that the other clients of the investment banks are the investors who actually buy into these deals. After the investment bank delivers the new stock to these institutions, the institutions want to make money not lose it. The banks therefore are incentivized to support the price even after the money is raised. They again have more than ample reason to ignore any inconvenient truths about their corporate clients.

Yes, yes, yes. I know. Following the implosion of the internet bubble in 2000, Wall Street investment banks fully separated research from investment banking. The compensation of analysts is now typically determined by “the overall profitability of the firm”. But clearly no banks generate revenues from their research. Research is fully a cost center. Even sales and trading revenues have dwindled dramatically, especially in comparison to investment banking revenues. Any analyst with a shred of common sense knows exactly where his bonus is coming from at the end of the year. The connection between research and investment banking used to be explicit. Now it has simply become “wink wink nod nod”.

The lesson to be learned is that sell side research targets have consistently proven to be nonsense. Anyone who loses money because they put faith in a sell side target has no one to blame but themselves.

Lesson #3: With technology, you get what you pay for

In my previous article, I made the point that Ohr had paid just $100,000 for Squalamine and that it had been purchased from a bankrupt seller who had already had the compound in clinical trials but had chosen to discontinue it.

With this knowledge in hand, it is shocking that anyone would have placed anything more than tangential faith in the prospects for the drug.

Yet we see this pattern over and over again. A micro cap reverse merger acquires some token technology for next to nothing. The company then churns out press releases (usually hyping the size of the overall market). Investment banks are incentivized with fee revenues. The stock soars (for a time).

More so than any other factor, the existence of low priced and dated technology is typically the best predictor of ultimate failure for these microcaps.

I have written about similar situations and have been consistently proven correct. When I wrote about Organovo (NASDAQ:ONVO), I noted that it had acquired dated technology for a six figure sum which quickly translated into a 10 figure market cap following a string of press releases and hyper promotional articles on the stock. In the time since my last article, the stock has fallen from over $13 to the $3’s, a decline of more than 70%. Not surprisingly, the company has yet to generate meaningful revenue from its technology.

Unipixel (NASDAQ:UNXL) was another similar case. As I noted in my article, press releases and hype from retail investors sent the stock soaring despite the fact that its underlying technology was dated and marginal. The stock has now cratered to just over cash value per share.

In all of these cases, the hype always focuses on the massive potential of the multi billion dollar market, while ignoring the fact that the company’s technology is likely worthless.

Lesson #4: Lack of institutional ownership is a strong predictor of failure

Sell side analysts were busy telling the world that Ohr was a 3-5 bagger over the next 12 months. And yet the company had a paltry institutional ownershipof just 24%.

Institutions are far more motivated and capable than individual investors when it comes to evaluating opportunities and making money on stocks. They have full time employees with deeper expertise and they have the deep pockets to pay for real research to be done.

Yet we see time and time again that retail investors think that they have outsmarted Wall Street and found an undiscovered bargain in some micro cap stock. While the institutions sit on the sidelines, retail bids up the stock by hundreds of percent.

When we see a massive run up in a stock coupled with a striking lack of institutional participation, it should at the very least serve as a clue that something is missing. This is often the first clue that a stock will end up being a far better short than a long.

Lesson #5: Share price is a poor predictor of ultimate success

Many readers are very unforgiving of short sellers. When the share price goes up following a negative exposé, these readers are quick to point fingers and suggest that the conclusions must have been false.

With each of the stocks mentioned above, we have seen significant spikes in their share prices before they cratered due to their ultimate failure. Ohr has been no exception to this pattern.

When I wrote about Ohr, the stock price was sitting at around $9. It eventually fell back to around $6.

In the few weeks before the failure of Squalamine, the stock spiked from $7 to nearly $12 based on enthusiasm for its near term prospects. With the stock now sitting at $3, we can see clearly that stock price is a very weak predictor of ultimate outcomes. This is especially true when looking at retail heavy microcaps. 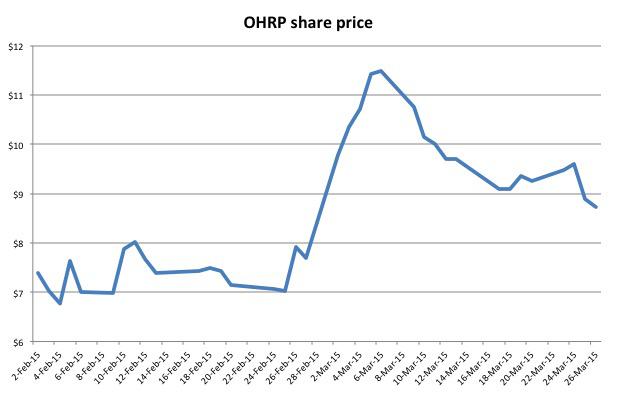