This article is the opinion of the author. Nothing herein comprises a recommendation to buy or sell any security.  The author is short RGLS. The author may choose to transact in securities of one or more companies mentioned within this article within the next 72 hours. The author has relied upon publicly available information gathered from sources, which are believed to be reliable and has included links to various sources of information within this article. However, while the author believes these sources to be reliable, the author provides no guarantee either expressly or implied.

On October 22nd, Regulus Therapeutics (NASDAQ:RGLS) released its “proof of concept” data for its Hep C drug RG-101. The stock price quickly soared from its prior level of $6-7 to as high as $25 (intra day) as enthusiasm for the drug ran wild.

At its peak, Regulus’ market cap was well over $1 billion and was briefly larger than that of Achillion Pharma (NASDAQ:ACHN). This was notable because Regulus has just a single drug through Phase I trials whereas Achillion has a total of four compounds, including in Phase II.

In any event, awarding Regulus a $1 billion market cap for a single Phase I drug was clearly not something that could last. The stock quickly dropped by as much as 30% from its $25 high before showing a slight bounce. 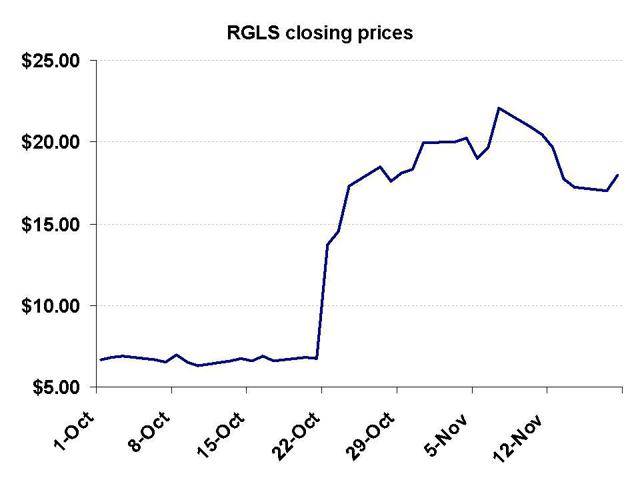 Regulus has multiple big pharma shareholders, including AstraZeneca (NYSE:AZN), Isis Pharma (ISIS) and Alnylam (NASDAQ:ALNY). But aside from these, the free float itself is dominated by retail investors. Outside institutional ownership stands at just 30%. Such retail heavy stocks are quite often subject to much larger irrational price moves than stocks, which are traded by institutions. But the extent of this recent move was very surprising even for a retail heavy name.

Here is what you need to know about Regulus and why the share price is likely to return to around $10.

First off, it is important to understand what the newly released data actually means. Part of the run up in the stock was fueled by speculation that Regulus had developed a “single shot” treatment for Hepatitis, which would make it far more convenient than the existing multi week pill regimen being offered by Gilead and its Harvoni.

The speculation of a “single shot” treatment was nonsense. Even the data released by Regulus shows this to be the case.

The graph below shows the data for the 16 patients in the trial. The downward slope of the line reflects the decrease in viral load over the 29-day period. The two relatively flat lines at the top reflect the two patients who received placebo. Naturally, their reduction in viral load was basically nil, hence the flat line.

But among the other 14 patients, the results were notable. We can see at the bottom right of the table that at 29 days, 6 of the 14 patients had viral levels that were Below Limit of Quantification (“BLOQ”). That is the goal. Clearly, this is a good thing, but it should also be kept in mind that this is a success rate of just 43% for a drug that is easily 5 years away from being on the market. Yet it should be kept in mind that this compares to a rate of 90-95% with existing Harvoni, which is already on the market. 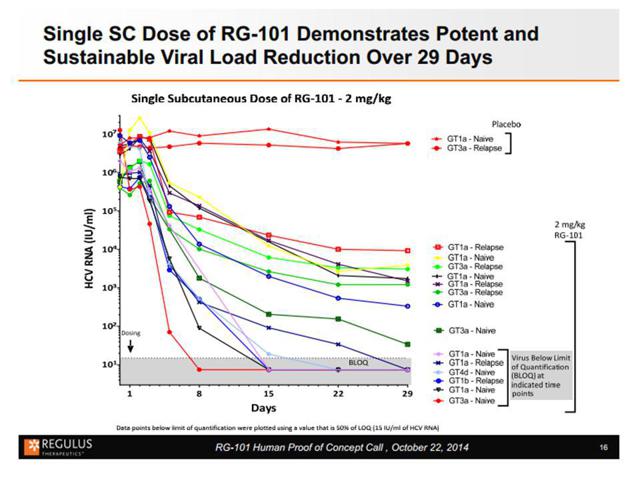 But a second slide released by Regulus highlights a bigger problem. In the table below, we can see that by day 57 there is a significant rate of ultimate treatment failure. This is indicated by the “u shaped” trend of the lines. Basically, what this means is that after an initial decline, the virus came back. 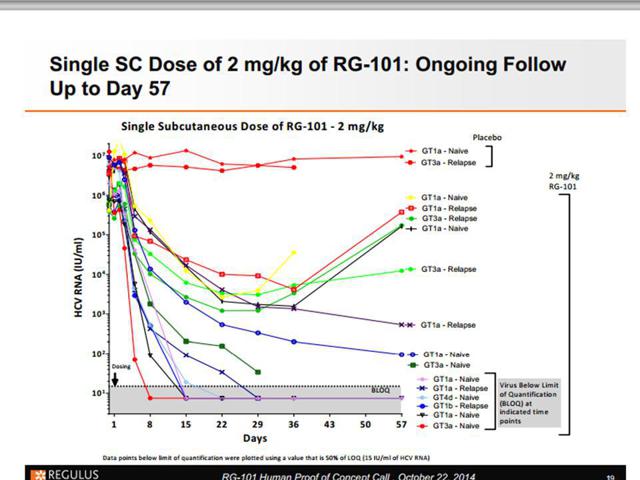 The reality is that the preliminary indications for RG-101 suggest that it is significantly inferior to Gilead’s Harvoni. The only thing that it might have had going for it was the notion of the “single shot” convenience. But this is clearly not the case.

REASON #1: Position relative to Gilead’s Harvoni. Harvoni boasts a success rate of 90-95% and is already on the market. RG-101 has a much lower success rate of 43% and that was only in a small Phase I study. Harvoni is oral and does not require injections. By the time RG-101 could even make it to market, much of the Hep C population could have already been treated.

Common sense and a few outside indicators should tell us that this share price move was totally unjustified and that it will correct sharply and quickly.

The first sign that the enthusiasm is largely misplaced comes from Regulus’ loss of partner Glaxo, just in time for the release of the “proof of concept” data. Earlier in the month, Glaxo had announced that it would be partnering with Dutch company Santaris. Santaris is taking a nearly identical approach to treating Hep C, which is targeting mir22 to block viral replication.

The significance of the loss of Glaxo may have been lost on many investors because this negative news (via an 8-K) was actually released midway through the very positive conference call discussing the proof of concept data. Regulus had been notified of the termination 5 days earlier.

On October 17, 2014, we received written notice from Glaxo Group Limited, or GSK, of GSK’s election to terminate the Product Development and Commercialization Agreement by and between GSK and us dated April 17, 2008, as amended, in light of GSK’s review of its overall research priorities.

Reason #2: Partner Glaxo abandoned Regulus in favor of Santaris who is developing a nearly identical therapeutic.

The biggest indication we have that the share price move is totally unjustified lies in the wave of insider selling that has coincided with the spike in the share price. As soon as the stock shot up, insiders basically couldn’t sell big enough or fast enough.

It should be noted that the CEO and Chief Scientific officer had been selling smaller amounts of stock earlier in the year and right up until the release of the proof of concept data. These sales were small in size and occurred at prices as low as $7.00. This is not the big indicator.

The big indicator lies in the form of the massive wave of selling by Regulus and the major insiders as soon as the stock popped.

On October 27th, just days into the stock climb, Regulus announced a public offering of common stock intended to raise $80 million to take advantage of the sharp rise in the stock from $6 to over $18. Prior to the offering, Regulus already had nearly $100 million in cash, such that this raise was entirely due to the share price level and not due to the near-term need to finance. When a company sells stock when it doesn’t need the money, it should always be taken as a sign that the share price may be at unsustainable levels.

But it should also be noticed that shareholder Isis was quick to get in on the selling action as well, filing to unload $10 million worth of stock in the same offering. In fact, by the time the offering was done, both parties ended up selling substantially more at the $17 offering price. The offering size was increased to $103.5 million in total, but only $76 million in proceeds are going to Regulus. This means that the amount being sold by Isis was increased disproportionately. The point is simply that at a price $17, Isis was very eager to sell more stock rather than less.

Perhaps of greater importance is the fact these big sellers were already selling earlier in the year at prices as low as $6. The recent spike in the share price has just been an excuse to sell more and faster.

In appendix I, I have included a list of the insider selling that has occurred in 2014. Including recent sales, it now amounts to over $60 million. This is in addition to the $76 million just issued by Regulus itself.

Reason #3: The speed and the huge magnitude of the insider selling indicates that insiders themselves are aware of how wildly overpriced Regulus is at current levels.

Shares of Regulus soared from $6-7 to over $25 intraday due to the release of simple Phase I data. The data is positive and encouraging, but in reality, even a 50% share price move (to around $10.00) on such news would have been premature. The size of the surge can be largely attributed to the fact that Regulus is a retail heavy name, which is subject to much greater than normal volatility.

Regulus has just a single drug in development, which is only in Phase I trials. Yet it still sports a market cap of nearly $900 million. The preliminary success rate among 14 patients is just 43%. This is good, but nowhere near the 90-95% level of Harvoni, which is already on the market.

But it is the insider selling which tells us which direction the share price is headed. Each of the major insider shareholders including Alnylam, Isis and AstraZeneca have been quick to unload large amounts of stock at current prices, even as there was already selling taking place as low as $6 earlier in the year.

Investors in Regulus should expect to see additional insider selling and see the share price drop back to around $10 in short order. This would still represent a 50% premium to where the stock was prior to the “proof of concept” data.