Back in March, I wrote a detailed article about a stock promotion campaign being conducted by Galena (GALE) and CytRx (NASDAQ:CYTR), which made use of the Dream Team IR firm. I presented very clear indications that these firms were involved with the use of various authors (via Dream Team) who used false identities to write promotional articles on their stocks. As the share prices soared, both CytRx and Galena ended up either selling shares or raising money via an equity offering. These articles appeared in a wide variety of places including the Motley Fool, Forbes, Wall Street Cheat Sheet and Seeking Alpha.

After I identified a large number of the authors and their aliases, hundreds of paid promotional articles were removed from those sites.

Today we got notice of another piece of the continuing fallout with Galena’s announcement that CEO Mark Ahn had “resigned” for personal reasons following an internal investigation at Galena.

At the peak of the promotion in January, shares of Galena traded at almost $8.00. The shares are now trading at just above $2.00. The decline is now around 70% in just a few months. It has been a very painful experience for anyone who was long the stock.

The purpose of this article is not to say “I told you so.” Instead it is to try to nail down some concrete lessons from Galena that can be applied to other situations involving stock promotions. For now, I am focusing mainly on biotech stocks.

Lesson #1: “It’s all about the drug” is the wrong mindset

When I first wrote about the promotions at Galena and Cytrx, many people could not disagree that my evidence was compelling. I had received requests from a Dream Team writer asking me to submit articles to him, which he would then submit to the companies for their review.

Yet even as they acknowledged the promotion, many smaller investors refused to acknowledge the serious consequences that would ensue. Instead they took the view that they believe in the drug’s prospects and that those prospects should drive the value of the stock.

We can now see that this view is painfully mistaken. It will prove to be a mistake with other heavily promoted biotechs as well.

First, investors need to realize that their views on the company’s prospects were undeniably shaped by a distorted paid promotion. Investors then need to seriously reconsider if they really understand the drug’s prospects at all or if they were actually heavily persuaded by the promo campaign.

Second, if the drug did have such fantastic prospects, then there should have been no need to conduct a risky and illegal stock promotion campaign.

Third, involvement in an undisclosed promotion campaign speaks heavily to the character of management. This is very important.

Lesson #2: Responses from management should be viewed with healthy skepticism

This is a lesson which can be applied to all promotions, not just biotechs. In many cases, a stock promotion gets exposed and called out by 3rd parties. This can include journalists such as Adam Feuerstein, or bloggers such as me.

It is more common than not that a company will feel the need to issue a response to any criticism and issue a formal statement. Many small investors seem to take responses from the companies far more seriously than they do the criticism of 3rd parties. They feel that if the company issues a statement, then it must be true.

I often challenge that assumption on a very regular basis with many of the companies that I write about.

In the case of Galena, Street.com journalist Adam Feuerstein was the first to call them out, highlighting their involvement with the Dream Team in paid stock touting campaign while selling stock. Then CEO Mark Ahn was quick to issue a statement to shareholders on February 14th which included the following:

The only facts in Mr. Feuerstein’s most recent article that are remotely accurate are that Galena previously engaged the DreamTeamGroup and that insiders at the company, including me, divested shares in mid January. All other accusations in this article – as with his prior reporting on Galena – are specious and conveniently arranged to create controversy.

For those who don’t know, the definition of “specious” is “superficially plausible, but actually wrong.”

So the CEO went on the record saying that Feuerstein was “wrong” in his accusations. The share price stabilized after February 14th and even went up a bit, staying that way for about 3 weeks. Investors had clearly relied upon the statement from the CEO.

I then released my findings in March which seemed to prove beyond any doubt that Galena was deeply involved in the promotion. This time, the company remained silent. Within weeks, the stock showed an additional decline of more than 50%. 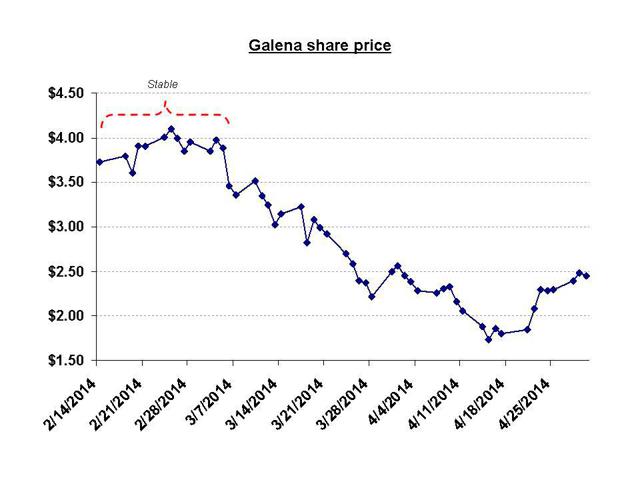 Note the stable share price action above in the weeks after the February 14th statement by Ahn.

The point of this lesson is that taking statements from management as indisputable gospel can be very dangerous. This is shown by the 50% decline in Galena after the statement from Mr. Ahn.

All such statements should simply be evaluated on their merits. Yet many small investors seem to regard official company statements as indisputable. This can prove to be expensive.

Lesson #3: The fallout from stock promotions runs far and wide

As we saw from Lesson #1, many small investors often choose to simply pin their hopes on the drug and fail to appreciate the externalities and unexpected consequences of a stock promotion. This is a grave mistake.

First, there is the potential for management turnover. As I have pointed out in the past, bringing any new drug through clinical trials is a difficult and time consuming task. When a company is forced to bring in new management in the middle of the clinical trial process, it has the potential to destroy much of the progress already made. We are now seeing this externality with the “resignation” of Galena CEO Mark Ahn, despite his earlier denial of running a promotion.

Second, there is legal fallout. We have already seen this when Galena announced the onset of an SEC investigation. This was a major catalyst to the extended share price decline starting in March. Additional legal fallout includes the possibility of class action lawsuits, such as those that Galena is currently facing.

Third, there is increased difficultly in financing. Here is the one that most people have likely missed. Any biotech, including Galena, might have the most promising drug in the world. But if they can’t raise enough money to complete clinical trials, then it simply won’t matter.

As of the June quarter, Galena had $39 million in cash. That is certainly less than a 1 year runway in terms of burn. At some point in the fairly near future, Galena certainly needs to raise more money. But this will be complicated by an ongoing SEC investigation and class action lawsuits. Will Galena need to declare “use of proceeds” in an equity prospectus which includes paying regulatory fines and settling lawsuits? If so, investors will react badly. Yet if Galena doesn’t disclose this potential, then they run the risk of further lawsuits. It is a Catch 22.

Financing is also complicated by the continuing declines in Galena’s share price which mean that even a small financing becomes relatively large in terms of dilution. The shadow hanging over Galena will likely mean that a larger than normal discount will be required in any equity offering.

All of these externalities are a direct consequence of having been caught up in a stock promotion. They have the potential to create serious negative consequences for the company. These consequences end up driving the share price far more than do the prospects for the drug itself.

Again, even with the stock down by 70% from January, my point here is not to say “I told you so.” There is really only one conclusion to take away from these findings.

When a biotech stock bears the hallmarks of a stock promotion, run (don’t walk) away from it.

Even solid prospects for a drug are often greatly overshadowed by the other problems and fallout that are created when a promotion is inevitably exposed.

There are always many other stocks to choose from, such that divorcing one’s self from a promotion stock should not be that difficult.

As a final thought, investors should consider the following.

Question: What do you call a stock that is down by 90%?

Answer: It is a stock that was down by 80% last week and then got cut in halfyet again.

Disclosure: The author has no positions in any stocks mentioned, and no plans to initiate any positions within the next 72 hours.

The author wrote this article themselves, and it expresses their own opinions. The author is not receiving compensation for it. The author has no business relationship with any company whose stock is mentioned in this article.

Additional disclosure: The author was previously an investment banker for a major global investment bank and was engaged in investment banking transactions with a wide range of healthcare companies including medical device, pharmaceutical, genomics and biotech companies. The author has not been engaged in any investment banking transactions with US listed companies during the past 5 years. The author is not a registered financial advisor and does not purport to provide investment advice regarding decisions to buy, sell or hold any security. The author currently has no positions in CYTR or GALE. Over the past 12 months the author has provided fundamental and/or technical research on GALE and CYTR to a variety of investors including those who hold long and short positions in those stocks. The author may choose to transact in securities of one or more companies mentioned within this article within the next 72 hours. Before making any decision to buy, sell or hold any security mentioned in this article, investors should consult with their financial adviser. The author has relied upon publicly available information gathered from sources which are believed to be reliable and has included links to various sources of information within this article. However, while the author believes these sources to be reliable, the author provides no guarantee either expressly or implied.