Short BETR. A Busted IPO And A No-Brainer Short

This article is the opinion of the author. Nothing herein comprises a recommendation to buy or sell any security.  The author is short BETR. The author may choose to transact in securities of one or more companies mentioned within this article within the next 72 hours. The author has relied upon publicly available information gathered from sources, which are believed to be reliable and has included links to various sources of information within this article. However, while the author believes these sources to be reliable, the author provides no guarantee either expressly or implied.

Amplify Brands (NYSE:BETR) is the maker of Skinny Pop popcorn. Skinny Pop is not intended to be a weight loss item. The term “skinny” simply refers to the fact that it is simpler, using fewer ingredients. (This article provides a side-by-side comparison of Skinny Pop vs. key popcorn competitors).

Until April 2015, Skinny Pop was the company’s only product. In April, the company acquired Paqui Tortillas and at that time changed its name to Amplify Brands. However, given that the acquisition price was a mere $12 million, it is still the case that Amplify “Brands” is still largely just a one-product company – popcorn.

Amplify came public at a price of $18 in August valuing the popcorn company at over $1.5 billion in enterprise value. But the stock immediately traded down and now trades for around $12.00, down 33% from the IPO price.

Key statistics are as follows: 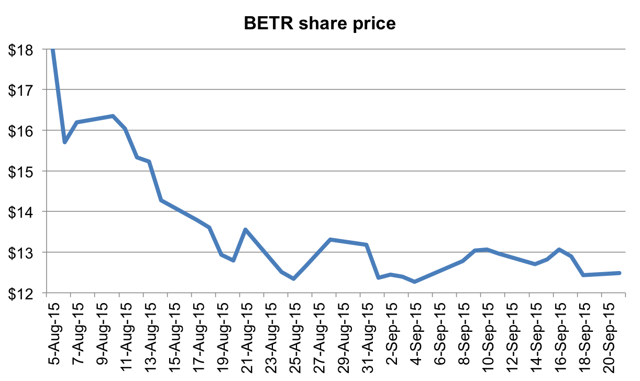 The IPO of Amplify Brands is proof positive that on Wall Street, anything is possible.

But with the IPO of Amplify Brands, we can see that sometimes a sneaker can slip through the cracks and the IPO market can just act as a dumping ground for private equity firms who need to unload one of their portfolio companies as quickly as possible.

TA Associates purchased a 74% stake in Skinny Pop in August of 2014 for just $320 million. Within 8 months (April 2015), the company had already hired Goldman Sachs to sell the stake to a bidder. However, when no bidder materialized, TA needed an alternative.

Skinny Pop has taken on nearly $200 million in debt and ended up paying dividends to shareholders (i.e. including TA Associates) of $80 million. In April, just as TA was attempting to sell the company, Skinny Pop then acquired a tiny tortilla chip maker for $12 million and changed its name to “Amplify Brands.” Now, as a seemingly diversified snack maker, the company filed for an IPO with Goldman as the underwriter.

The most unusual feature of this offering was that in the IPO, fully 100% of the shares being offered to the public came from selling shareholders. This means that none of the proceeds raised are going to the company. In fact, 82% of the shares came straight from TA.

Clearly, this should be a tough sell. After all, if the insiders are all looking to cash out and the company doesn’t derive any benefit from the IPO, then why should anyone buy it?

There are a few key elements required in order to make such a transaction happen. Especially when dealing with lofty multiples such as Amplify.

First off, there needs to be the appearance that there are still substantial growth prospects ahead for the company. It is plain to see that Skinny Pop has already experienced a surge in growth. In past years, the company was experiencing triple-digit growth as it expanded from a presence of just a few thousand stores to its current level of nearly 50,000 stores. But by now, Skinny Pop has already penetrated the largest grocers and convenience storesin the country. This includes Sams Club, Costco (NASDAQ:COST), 7 Eleven, Wal-Mart (NYSE:WMT), Kroger (NYSE:KR), CVS (NYSE:CVS) and Target (NYSE:TGT).

It is therefore not surprising that growth has declined dramatically, as shown below:

Meanwhile, operating margins have also been cut in half.

These slowing growth rates and falling margins would normally create a major problem for the IPO.

At an IPO price of $18, Skinny Pop would be coming public with an enterprise value of over $1.5 billion. That is more than 50% larger than the size of the entire addressable market for ready-to-eat popcorn in the US (according to Amplify’s own IPO prospectus). It is also a valuation of more than 10x 2014 revenues! So there needed to be something else to the story.

As a result, in April 2015 (just when TA was trying to find a buyer for Skinny Pop), the company acquired Paqui Tortillas. The acquisition price was just $12 million, but it served a much greater purpose.

Skinny Pop could now be marketed to investors as a diversified snack company and the size of the popcorn market would not be a limiting factor. As a result of this tiny acquisition, Skinny Pop changed its name to “Amplify Brands” just shortly before the IPO.

IPOs are supposedly priced for to provide initial buyers with a pop in share price. That is the way IPOs are supposed to work. But with Amplify, we can see that the stock traded straight down from the very beginning and has continued to trade off by more than 30%.

Investors were clearly not buying the “diversified snack company” line. Nor were they buying the hyper growth story.

The question then becomes “if this IPO was so bad, how did it get completed in the first place.”

The fact is that Goldman Sachs brings many very attractive IPO deals to market. If you play 10 of these deals, you will probably end up making decent money in seven of them. And in perhaps three of them you will hit some serious home runs. It is worth losing some money on the occasional bad deal in order to maintain a relationship for future home runs.

As a result, when Goldman launches a “favor deal” like this one, there are no shortage of investors who will buy a small slug as a favor to Goldman. They then hold for a brief period and start quietly unloading while they can. This is exactly why the deal never traded up and exactly why the stock is now down by 30%.

The bull case on Amplify rests on the assumption that Skinny Pop will be so popular that it will literally take over the salty snack market and will be the number one Ready-to-Eat popcorn maker.

But we can already see that there are dozens of competitors out there with a product that is nearly identical. These products are sold in the same retail outlets and at similar prices as Skinny Pop.

A list of these competitors can be found on the GoodGuide and it runs 15 pages long with 197 products! 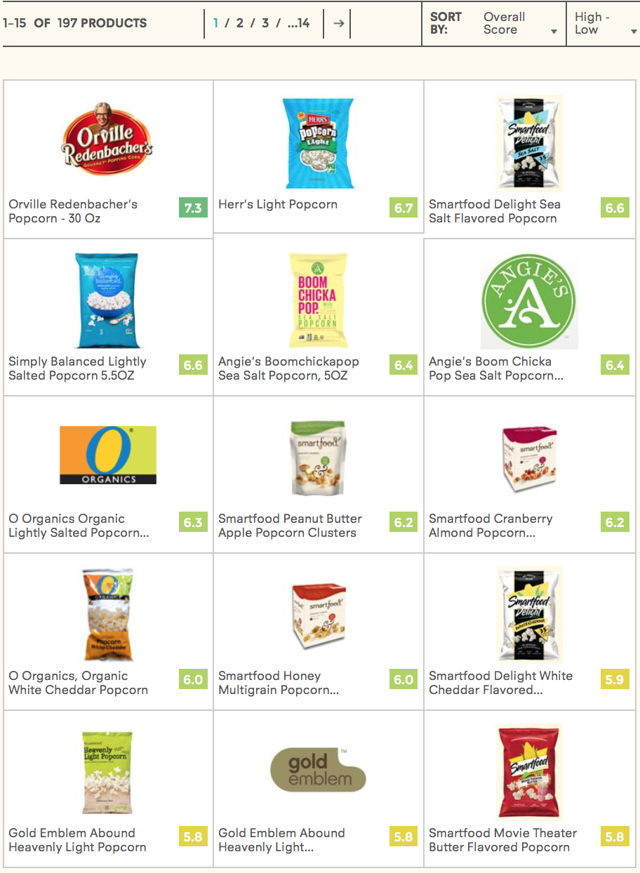 Evaluating Amplify at a price of $12

But it is clear that even at $5.73, TA overpaid substantially. We can see from the above charts that TA acquired Skinny Pop when growth was still clocking in at 160%. Operating margins had just declined from 47% to 20% for the first time.

Now we can see that sales growth has plunged to just 33% from 160%, while operating margins have failed to recover.

At a price of $12.00, Amplify has an enterprise value of around $1.1 billion. That equates to a whopping 7.3x LTM sales. Amplify is clearly being priced for hyper growth.

To put this in perspective, when TA acquired its stake in the company one year ago, it did so at a multiple of just 4.5x sales. Since that time, the company has taken on additional debt while growth has slowed and margins have fallen.

Despite the lofty multiple for Amplify, growth is now expected to fall even further.

On August 31st, the managers and co-managers on the IPO all initiated coverage on the stock. Not surprisingly, 4 out of 5 of them initiated with a price target of exactly $18 (the same as the IPO price).

But it is interesting to note that co-bookrunner Credit Suisse initiated with a target price of just $13.00. The key reason for the low price target is that Credit Suisse feels that the only way to justify a higher valuation is to attribute value to acquisitions that have not yet happened. Credit Suisse also assumes that the rate of growth on sales will be slowing to just 20% by 2018.

Because Amplify did not receive any proceeds in the IPO, we are now looking at a $900 million market cap company, which has just $13 million in cash against nearly $200 million in debt.

Credit Suisse has estimated that EBITDA for 2015 will come in at $72.2 million. That puts Amplify at an EV/EBITDA of more than 15x. This means that Amplify is going to face limitations on how much it can further borrow.

What all of this means is that Amplify is saddled with debt and has limited cash with which to conduct acquisitions to achieve required growth.

TA Associates still owns 58% of Amplify. And we have already seen that TA has been in a rush to sell its stake as quickly as possible. It was only 8 months after the stake was acquired that TA began shopping it via Goldman Sachs.

TA paid just $5.73 per share for its stake in Amplify. But that is now largely irrelevant. With the proceeds from the IPO along with its share of $80 million in special dividends, TA has already received back 100% of its original investment in Amplify. Anything sold from here on out is pure profit for TA.

As a result, TA’s 58% stake in Amplify creates a massive overhang on the stock.

More importantly, we can see from the post IPO trading that the initial IPO buyers have been slowly bleeding out stock. This was clearly a favor deal for Goldman Sachs, such that buyers are simply looking to get out of their positions and (hopefully!) lose as little money as possible.

This steady stream of sellers also creates significant downward pressure on the stock.

When TA acquired its stake at $5.73, Skinny Pop was still posting growth at around 160% y-o-y. That is largely what justified the premium multiple for the company at the time. But now growth has plunged to just 30%. This is why TA was in such a rush to sell the company after just 8 months. (A normal PE holding period would be around 3-7 years.)

As a result, it is tough to say where Amplify will ultimately settle down. But with the abundance of sellers and little chance of meeting growth estimates, we should see at least 30-40% downside from current prices.