Short PCRX. Why are insiders selling ?

Last week I published an article noting several sell signals which were emerging at Pacira Pharmaceuticals (PCRX), which was closing in on a triple since 2012. In just the past few weeks the shares have risen by more than 50%, to $30.00 from $20.00.

Following my article, it was disclosed that MPM Asset Management, which employs both the CEO and CMO from Pacira, had begun selling 500,000 shares at $27.86. In addition, Pacira General Manager John Pratt sold 100% of his remaining shares at $28.46. 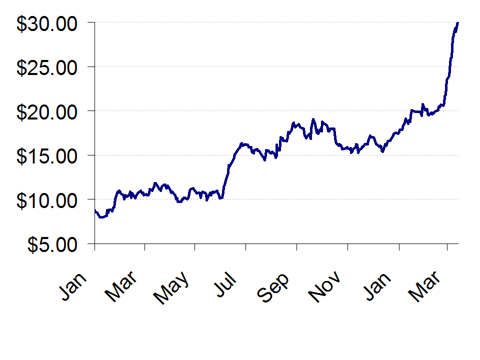 The previous key sell indicators had been the onset of insider selling by anchor investors Sanderling Ventures along with a $120 million equity-linked financing by Pacira itself. This could lead investors to believe that insider selling might be set to continue.

Even Uber-Bull Jim Cramer noted that with Pacira trading at $28.00 it was time to “take profits”.

In February, BioWire noted that Pacira’s $676 million market cap looked “quite ridiculous” citing its sales slowdown and negative gross margin. Yet now the stock is valued at $1 billion.

Following the release of a wide earnings (loss) miss, the shares fell by as much as 5% into the $24.00 range. But the stock has been recently buoyed by analyst upgrades to as high as $32.00 by Wedbush and Jefferies, along with a conference presentation by Pacira at Barclay’s.

Following my article, MPM Asset Management disclosed a sale of 500,000 shares at a price of $27.86. That trade had crossed in after-hours at a 5% discount to the closing price and represents a discount of 8% to the current price.

In a subsequent sale, General Manager John Pratt sold 100% of his remaining shares in Pacira at a price of $28.46, netting himself over $266,000 in proceeds.

The sales by MPM are the most telling.

MPM has long been an anchor investor in Pacira. But of much greater importance is the fact that both Pacira CEO David Stack and Pacira CMO Gary Patou are in factManaging Directors at MPM. While working for MPM, the CMO works only part time for Pacira.

As a result of this involvement, it is safe to say that among insiders, MPM has far greater insight into Pacira than any other fund.

We can now see from the SEC Form 4 filings, that insiders have now sold $25 million worth of their shares in the month of March alone. The last time an insider purchased shares was nearly one year ago, consisting of just 10,000 shares at a price of $9.75.

With the share price now sitting within just a few percent of even the highest analyst targets, it is clear that the upside is now limited in the foreseeable future while the downside is considerable. Following its recent 50% rise, there are no new results or developments expected from Pacira in the near term.

The fact that this rise in the stock has occurred along with the market rising 10 days in a row has likely not been lost on the insiders as they sell.

In the current market environment, it seems that analysts view virtually every traded equity as a compelling buy regardless of its price or recent rise in valuation. Any time a share price moves up to its target, analysts simply re-raise the target to a higher level.

But in the case of Pacira, we can see that this company represents an investment banker’s dream client in terms of future financing needs. Pacira’s historicalinvestment bankers have included Barclay’s, Jefferies and Wedbush.

The company now sports a $1 billion market cap, which means that it is large enough to justify meaningful 9-figure financings in terms of investment banking fees. And it is also clear that the financings will need to continue due to Pacira’s minimal revenues of only $10 million last quarter which were accompanied by a $16 million loss.

These losses are quite obviously set to continue given that Pacira continues to sell its product at a negative gross margin. Even Pacira management noted on its conference call that it hopes to achieve breakeven only in 2014. If there is a profit to be had we must then wait until 2015.

The real question becomes: “Why are those who know the most about Pacira also the ones doing the most selling ?”

The question they are likely asking themselves regarding selling is: “If not now, then when?”

As the share price rose, the company was quick to make use of the share price rise to issue equity securities raising $120 million. At that time Sanderling began selling. Now the fund which employs both the CEO and the CMO has begun selling shares and even employees such as the General Manager are selling 100% of their shares.

The share price has benefited from every tailwind possible including bullish upgrades despite an earnings miss and a 10 day consecutive rise in the stock market.

With the share price now closing in to just a few percent of the newly upgraded share price targets, and with no new corporate developments expected in the near term, the shares have simply run out of further upside catalysts.

Aside from the selling insiders, outside investors will now need to pause and evaluate the $1 billion valuation in the context of a stock that sells at negative gross margins with quarterly revenues of just $10 million.

As BioWire noted at $20.00, before the 50% rise, the valuation continues to be ridiculous. It is likely that we will see ongoing insider sales to cash in on this stock market gift to share holders.