This article is the opinion of the author. Nothing herein comprises a recommendation to buy or sell any security.  The author is short FTK. The author may choose to transact in securities of one or more companies mentioned within this article within the next 72 hours. The author has relied upon publicly available information gathered from sources, which are believed to be reliable and has included links to various sources of information within this article. However, while the author believes these sources to be reliable, the author provides no guarantee either expressly or implied.

Flotek provides oilfield products, services and equipment to the oil, gas and mining industries, as well as compounds to companies that make cleaning products, cosmetics, food and beverages.

Approximately 65% of the company’s revenues are derived from its Energy Chemistry Technologies (“ECT”) segment, which includes chemicals for specialized enhanced and improved oil recovery markets (“EOR” or “IOR”).

The company’s key branded product line (within ECT) is its CnF (“Complex nano-Fluids”) line which is designed to be environmentally friendly, stable mixtures of oil, water and surface active agents which organize molecules into nano structures. The result is enhanced recovery from treated wells.

On July 22nd, shares of Flotek Industries closed at $12.79, closing in on lows not seen since 2012. The next day, the company reported a surprisingly strong beat on its quarterly earnings announcement. The stock jumped to as high as $18.64 – a gain of as much as 46% for the day as investors registered their strong approval.

One key reason for the bullish response was that Flotek recorded a positive revenue beat in an environment of declining oil activity across the board. But even more important was the performance of CnF.

Flotek itself noted that “based on volume, Flotek’s second quarter CnF sales grew 76% sequentially and 34% year-over-year in a market in which activity has declined between 40% and 60% depending on your favored metric.”

There is absolutely no doubt, the Flotek’s Energy Chemistry Technologies segment and more specifically growing acceptance of Flotek’s CnF completion chemistries drove the Company’s strong second quarter performance. Moreover, as we noted last night, there is a little down in our mind that CnF has now reached the tipping point in most North American basins which suggests operators are more inclined to consider using CnF than not. The growth in CnF volumes provides strong support for that statement.

Author Kevin Quon was then quick to amplify this view in an article entitled, “Flotek Rises On The Growing Success Of Its Energy Chemistry Segment.”

Unfortunately, for those who are now long the stock, a closer read of various filings and documents shows that the “beat” due to Energy Chemistry was entirely engineered and the reported level of performance will not be continued or repeated.

We are not at a “tipping point.” It is still the case that a weak environment for oil producers results in predictably weak sales of CnF.

Based on the information below, Flotek should be expected to fall to well below its starting level of $12.79 – a decline of 20-30%. This is because the “beat” was actually a sizeable “miss” in disguise.

Here are the 4 reasons why we will quickly see a sharp drop in Flotek:

1. Flotek’s “beat” was entirely the result of one unnamed customer who produced a massive last minute surge in purchases. These purchases amounted to fully 19.5% of all revenues and were concentrated almost completely in the Energy Chemistries Technology segment (i.e. they were almost entirely for CnF).

2. The surge in purchases appears to be part of a 3-year old contract that was actually expiring this quarter. (the purchases were not normal, were not representative and will not be repeated).

3. Contrary to management statements, the surge in revenues was actually the result of heavy discounting.

4. Without the purchases of the mystery customer, Flotek would have recorded revenues of just $70 million – a 15% decline vs. Q1 and not the 5% increase that management has touted. This represents a 33% decline year over year.

A review of the filings and other documents shows that it is quite clear that the other customer was Pioneer Natural Resources (NYSE:PXD).

Pioneer and Flotek signed a 3-year purchase agreement back in May of 2012. As shown, that agreement was set to expire in April of 2015.

When the agreement began, we can see that there were large purchases (amounting to 10% of revenues) by a new customer described as “Customer B.” But in subsequent periods those purchases quickly declined to the point where they did not need to be disclosed.

In the recent 10-Q for 2Q 2015, we can see that a new customer makes an appearance again who had not been a 10% customer in 2014. The new customer (Pioneer) becomes Customer A, while Halliburton has been renamed to Customer B.

In the prior 10-Q for Q1, we can see that Pioneer provided 12% of revenues. In prior periods, purchases from Pioneer were too small to be disclosed.

Question: how unnatural were these purchases by Pioneer?

The point of this section is to demonstrate that the sudden surge of purchases were unnatural and were related to the fulfillment of an expiring contract. This is what led the surge in CnF revenues for Flotek. But far from being a “tipping point,” it was a one time, end-of-contract purchase which will not be repeated.

The chart below comes from FracFocus. It shows that completions using citrus terpenes FELL from 330 in December 2014 down to 108 by May 2014.

This is a decline of 67% between December and May. This sharp level of decline is basically in line with management’s estimate about drilling and production activity falling by 40-60%. 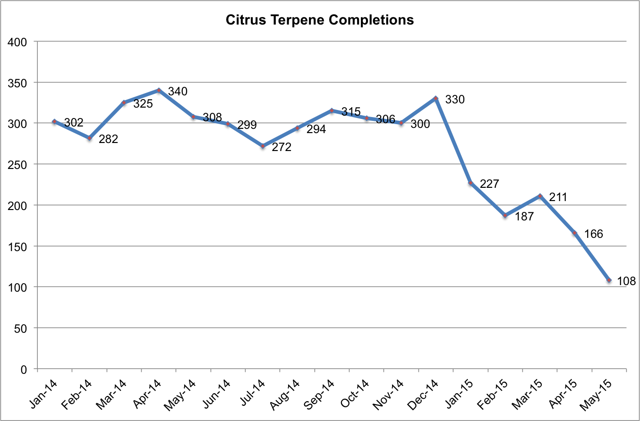 More important is the data as it applies specifically to Flotek’s new largest customer, Pioneer. The next table below shows two things:

First, between Q4 of 2014 and May of 2015 (the end of the contract between Pioneer and Flotek), Pioneer’s number of citrus terpene completions more than quadrupled from 7 to 31.

Second, by 2Q 2015, Pioneer suddenly had 31 completions – the largest number of completions of any driller – and by a 50% margin!

So even as the rest of the space shows a dramatic decline in completions using citrus terpenes, Pioneer showed a one-time surge, suddenly making it the largest customer of Flotek. 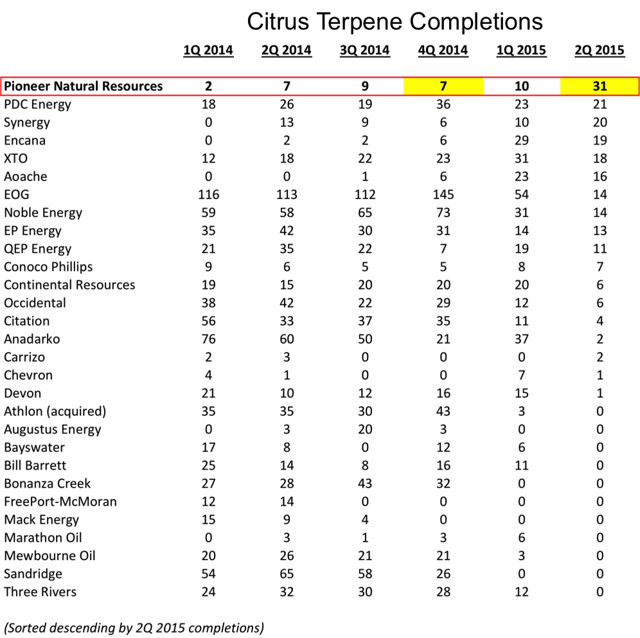 How heavy was the discounting required to generate this volume?

On its quarterly conference call, management stated that, “based on volume, Flotek’s second quarter CnF sales grew 76% sequentially and 34% year-over-year.”

Yet we can see that CnF revenues actually FELL by 9.7% year over year, despite the 34% rise in volume. The result is that these volumes were only possible despite discounting within Energy Chemistry Technologies of around 33%.

Investors should keep in mind that this heavy discounting was required even though Flotek had the 3-year contract with Pioneer that was expiring in April and which resulted in an unnatural, one-time boost to revenues.

As a result of this heavy discounting, Flotek’s gross margin within the Energy Chemistry Technologies division fell from 43.8% last year to 36.2% in the most recent quarter.

The bull case on Flotek is heavily dependent upon CnF reaching a “tipping point.” The reason why the stock soared by as much as 46% was that CnF apparently showed rising sales despite sharply declining production activity in the oil space.

Yet a closer look reveals that this was not the case.

Yet even with that unnatural, one-time boost, Flotek was forced to engage in heavy discounting of around 33% in order to maintain volumes.

Without the benefit of this one-time purchase, we can see that overall revenues would have fallen by 33%, primarily attributable to CnF.

We can already see that the stock is starting to retreat from the $18.64 spike it hit after earnings. This is likely the result of investors starting to realize the one-time nature of the revenues.

The real result for Q2 should be viewed as a “miss” not a “beat.” Investors should expect to see the stock correct an additional 20-30% from here, breaking back below the $12.79 level where they started.